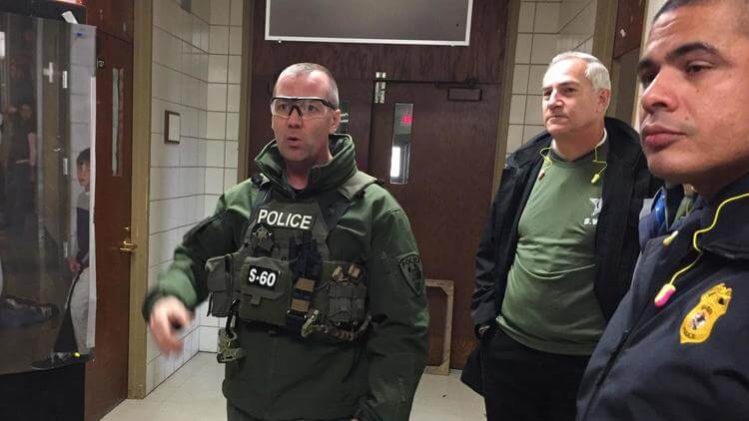 "The overtime killers" is what the Elgin Police Department's SWAT team has dubbed its most effective pieces of equipment — the Ballistic Armored Tactical Transport and accompanying robot cameras.

Four residents got to see BATT and the robot up close this week as part of "SWAT for a Day," an event offered to local nonprofits looking for auction items in fundraising drives.

At the Community Crisis Center's annual gala last spring, the package was the subject of a bidding war between Scott Budd and Glenn Murphy. When Budd won the bid — a present for his son Justin's birthday — he invited Murphy and Mark Seigle to come along.

The police SWAT team trains every other week and so far this year, six or eight groups have joined members for the experience. While their training locations change, this time the department used city-owned property adjacent to the Elgin Sports Complex.

SWAT for a Day groups watch for an hour of the all-day training. Participants wear ear protection because officers were using live fire while practicing sweeping hallways, classrooms and offices for "active shooters."

The officers aim at steel-backed shooting targets placed throughout the building while practicing throwing flash-bangs into rooms and looking for both suspects and civilians.

The training regimen and the department's equipment were chosen by Chief Jeff Swoboda and the city council following an armed standoff in February 2007, Lalley said. A man holed up in a Chicago Street house kept officers at bay for nearly 28 hours before shooting himself.

The city purchased BATT in 2011. Its radio-controlled unit has cameras that can both climb or descend stairs and allow officers to talk to a suspect remotely, he said.

In other training, Elgin SWAT was taught how to use small explosives to break down doors without injuring those inside a room by the Las Vegas Metro Police's SWAT team and by the federal Department of Homeland Security. Elgin is one of the few departments in the state trained for "explosive breaching," Lalley said.

The four men watching training in SWAT for a Day asked questions about the types of guns and equipment officers carry when called out for emergencies. Lalley also explained that their first concern is for the lives of any hostages and civilians. Concern for officers comes next, followed by the suspects.